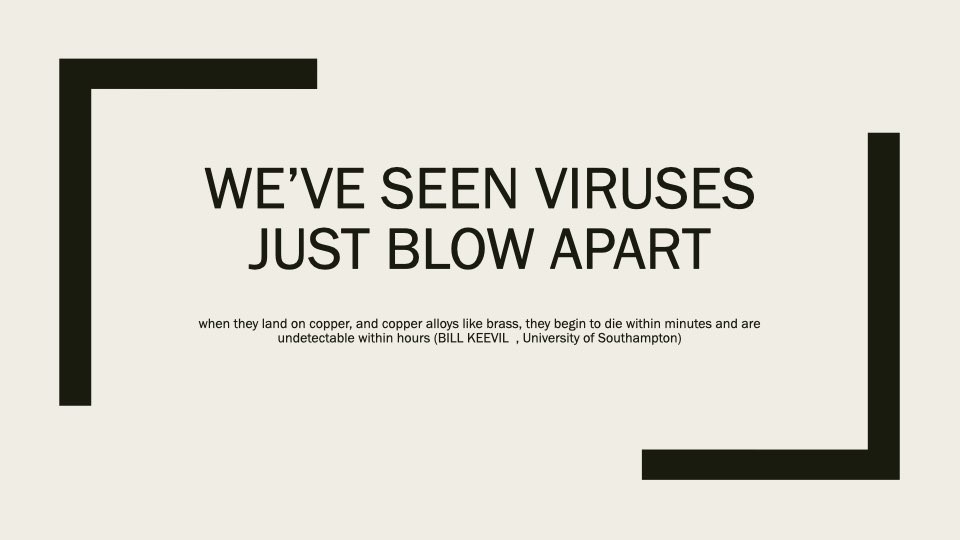 These ancient civilizations were referring to copper, a material that cultures across the globe have recognized as vital to our health for more than 5,o00 years. When influenzas, bacteria like E. coli, superbugs like MRSA, or even coronaviruses land on most hard surfaces, they can live for up to four to five days. But when they land on copper, and copper alloys like brass, they begin to die within minutes and are undetectable within hours. “We’ve seen viruses just blow apart,” says Bill Keevil, professor of environmental healthcare at the University of Southampton. “They land on copper and it just degrades them.”

Copper is a natural, passive, antimicrobial material. It can self-sterilize its surface without the need for electricity or bleach.

But what about expense? Copper is always more expensive than plastic or aluminum, and often a pricier alternative to steel.  But given that hospital-borne infections are costing the healthcare system as much as $45 billion a year—not to mention killing as many as 90,000 people—the copper upgrade cost is negligible by comparison.

Copper (and brass), in addition to guaranteeing an antimicrobial metal surface, is also 100% recyclable! (Ed)